The garlic in Henan’s early maturing production area has entered the picking season for more than a week. The frost weather has not seriously affected the garlic harvest. The early-ripening garlic is currently being harvested, and the late-ripening garlic begins to be harvested about a week later. Mr. Zhang said. 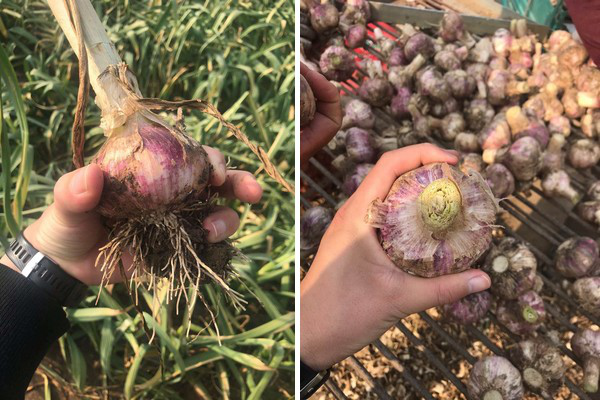 “The garlic planting area in Shandong production areas this season has increased by 10% -15% compared to the previous season, and the garlic size is much larger than in previous years. This is mainly due to the careful cultivation and strengthening of the garlic farmers in this season, hoping to maintain the quality of garlic and continue the previous season High price. ”Manager Zhang said,“ However, the increase in planting area and the yield per mu has resulted in oversupply of garlic in the market and the price has fallen. Compared with the garlic price 2019 of 1.7-2.0 yuan / kg at the beginning of last year ’s harvest season, the current The garlic price 2020 is only 0.6-0.7 yuan / jin, and the price after drying is only 1.2 yuan / jin. In addition to the new garlic, the price of the old garlic has also fallen seriously recently, from about 3.5 yuan / jin in early April , Fell to about 1.6 yuan / jin this week. ”

“For export, because new garlic needs to be dried after harvesting, we have not yet begun to accept new garlic orders. The export of new garlic is expected to officially start from the end of May. We have stopped the shipment of old garlic at the end of April. Hope to wait The market digests the products imported in the previous period and then exports them. ”Manager Zhang said,“ In the first two months, the demand in Europe has increased. Some customers in the Russian region chose to pay higher land transportation in order to pick up the goods as soon as possible. After several weeks of concentrated exports, the current European market is relatively stable. But I expect that Chinese garlic will run at a low price this year. ”

When talking about the impact of Spanish garlic, which has also entered the harvest season, on China’s garlic exports, Manager Zhang said, “Chinese garlic cannot be compared with other countries in terms of planting area or output. Spanish garlic is only possible in the short term It affects the market internally, and the scope of influence is limited. Therefore, the international garlic market is mainly determined by the trend of the garlic market in China. In particular, the price of garlic in China is lower than other countries, so it has more advantages in trade.

Our garlic comes from very fertile soil, with unique planting advantages. In addition, our planting personnel have rich planting experience, and constantly increase various experiments, only to provide customers with higher quality garlic and garlic price.